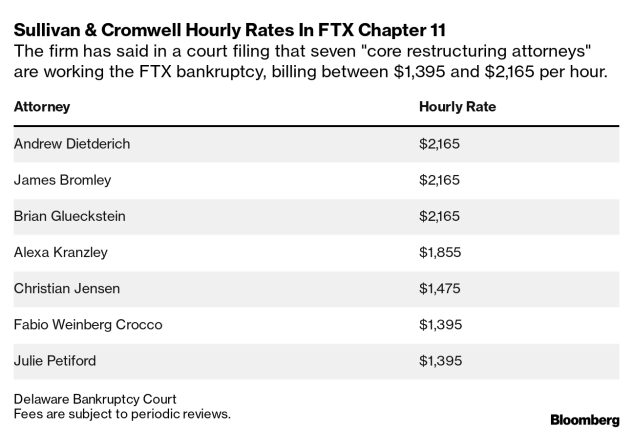 According to a new report, the controversial law firm Sullivan & Cromwell is on track to reap a fortune from its work on the FTX cryptocurrency exchange’s bankruptcy case.

Sullivan & Cromwell’s costs in the FTX case are estimated to reach hundreds of millions of dollars before the firm’s bankruptcy investigation is over, Bloomberg Law reported on Jan. 27.

As the FTX trial is scheduled for October 2023, the firm’s lawyers now have about eight months to untangle the complicated FTX case, which will cost a lot of time and money. Sullivan & Cromwell has more than 150 people working on the FTX case, including 30 partners with rates exceeding 2,000 per hour. The report notes that associates are charging up to about $1,500 per hour, citing a court filing.

In a court declaration, Sullivan & Cromwell said that its proposed fees are in accordance with market rates by other leading law firms and actually represent a discount from the rates used in non-bankruptcy matters.

Bankruptcy experts have been facing a high demand as the crypto winter of 2022 generated many bankruptcy filings, including those by major crypto firms like Genesis Global Trading, Celsius Network and

Crypto exchange FTX has recovered more than $5 billion in different assets, not including another $425 million in crypto held by the Securities Commission of the Bahamas, a bankruptcy attorney said during a hearing Wednesday.

There’s still a sum missing in what is owed to customers and the amount is still unclear, the attorney said.

“We have located over $5 billion of cash, liquid cryptocurrency and liquid investment securities measured at petition date value. [It] just does not ascribe any value to holdings of dozens of illiquid cryptocurrency tokens, where our holdings are so large relative to the total supply that our positions cannot be sold without substantially affecting the market for the token,” said Landis Rath & Cobb attorney Adam Landis on FTX’s behalf.

The announcement substantially raises the total FTX claims it holds, after the company’s new leadership said it could only find just over $1 billion on Dec. 20, 2022. The total amount FTX owes its creditors is still unclear. In initial bankruptcy filings, the company’s management checked off the box indicating a figure between $1 billion and $10 billion.

Sam Bankman-Fried instructed his lieutenant, Gary Wang, to create a “backdoor” for Alameda to borrow from

Sullivan & Cromwell’s removal or limitation as bankruptcy counsel for FTX would “severely, if not irreparably” harm customers and creditors, the cryptocurrency exchange’s CEO John Ray told a judge.

An “army” led by the firm’s lawyers have worked under Ray’s supervision around the clock for the past two-plus months, he told Delaware Bankruptcy Court Judge John T. Dorsey in a filing. The work has stopped assets from being depleted and aided federal investigations, he said.

“The advisors are not the villains,” Ray said. “This is not the time to distract and burden the debtors.”

FTX in the Tuesday filings is defending Sullivan & Cromwell’s role as its lead bankruptcy counsel after four US senators questioned the firm’s work for the crypto exchange prior to its implosion. The US Trustee has also raised concerns about whether the firm’s disclosures have been sufficient.

Sullivan & Cromwell has advised FTX since the exchange first initiated Chapter 11 proceedings in November, listing assets and liabilities of at least $10 billion. Dorsey is scheduled to weigh in on FTX’s application to keep the firm as its main bankruptcy counsel in a Friday hearing.

In a court filing on behalf of FTX, the firm said that

By Dietrich Knauth and Andrew Goudsward

(Reuters) – Bankrupt crypto exchange FTX has asked a U.S. bankruptcy judge for permission to pay its top restructuring lawyers as much as $2,165 per hour, an unusually high rate for a company that cannot afford to repay all of its debts.

FTX declared bankruptcy on Nov. 11, collapsing amid a wave of customer withdrawals. Federal prosecutors have charged founder Sam Bankman-Fried with stealing billions of dollars in FTX customer assets to plug losses at his hedge fund, Alameda Research, and two of his former associates have already pleaded guilty. Bankman-Fried is scheduled to be arraigned in New York on Thursday.

New York-based law firm Sullivan & Cromwell is representing FTX in its Chapter 11 case and guiding its efforts to return assets to customers. FTX late Wednesday asked the Delaware federal judge overseeing the case for approval to pay the firm’s partners and special counsel between $1,575 and $2,165 per hour for their work.

The top lawyers’ rates far exceed the $1,300 per hour billed by FTX’s new CEO John Ray, who also filed an application with the court late Wednesday.

Court-approved billing rates for bankruptcy attorneys did not cross the $2,000-per-hour mark

Bankrupt crypto exchange FTX Ltd. paid its lead lawyers more than $12 million to handle the earliest portions of the closely watched Chapter 11 case, according to a Wednesday court filing.

Law firm Sullivan & Cromwell received a $12 million retainer from an FTX-controlled company shortly before the exchange’s Nov. 11 bankruptcy filing, the filing shows. The firm has drawn a little more than $3 million of that, largely for work done in the days leading up to the rushed bankruptcy filing.

Quinn Emanuel is also working for FTX and its board of directors as special counsel in a litigation capacity, looking for legal claims the bankruptcy estate might be able to bring. The firm received about $575,000 in the three months leading up to FTX’s filing, according to another court filing.

Landis Rath & Cobb, whose lawyers are FTX’s local Delaware counsel, received a $300,000 retainer in the 90 days leading up the filing.

FTX imploded in spectacular fashion in early November, leading to the firing of co-founder Sam Bankman-Fried and a rushed Chapter 11 filing of more than 100 FTX-related companies. In a sign of the hurried pace, FTX didn’t submit typical “first-day” filings until