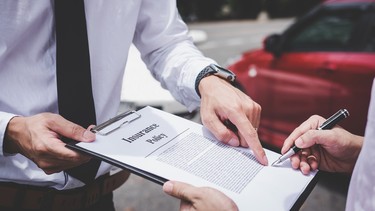 We apologize, but this video has failed to load.

When Maple Leaf Mitch Marner had his SUV stolen at gunpoint one evening in May outside a local movie theatre, it put a very public face on a crime that seemed to have exploded overnight. It’s not just here. Like the GTA, places like New York City are also reporting a dramatic increase in the often-violent thefts. By the time Marner was relieved of his Range Rover, Toronto police said they’d already reached 2021’s yearly total, not even six months into 2022.

Could it happen to you? If you drive a vehicle that shows up on Canada’s list of most stolen, you’re already a target for thieves. You also probably already pay a higher price for car insurance. Matt Hands, director of insurance at Ratehub, says high-end SUVs are definitely a target for thieves. Carjackers are stealing what most car thieves are stealing: popular vehicles to be resold overseas for many times their Canadian value. Ongoing global shortages of cars and parts have exacerbated the theft problem, and the value of used cars has never been higher.

When two Ontario teens were recently arrested on armed carjacking charges, police report they actually weren’t nabbing high-end fare; instead, the vehicles they stole were “intended to be used to commit other criminal offences.” Regardless of why somebody wants your vehicle, if confronted, let them have it. But it’s a good time to haul out your insurance policy and make sure you are adequately covered — even if you don’t have a fancy, high-end ride.

What kind of insurance coverage covers a stolen vehicle?

“Theft is a comprehensive claim,” explains Hands. “Basic, standard auto policies might not have theft coverage — you have to specify it.” He notes that if you have a car loan or lease contract, it probably has already specified that you have this kind of coverage. Check that you have one of the following, as explained by Ratehub:

More On This Topic

Making a comprehensive claim is different from an at-fault crash or a moving violation, and shouldn’t result in a rate increase. “But if you have three comp claims in a short period of time, for instance, that could impact your rates,” says Hands. He uses the example of a stone-chipped windshield. While technically that would be a comprehensive claim, most people eyeball their deductible and just pay for a new windshield.

As many thieves are targeting pricey vehicles, make sure you have some kind of gap coverage on your policy, or take it when you’re buying from the dealership. While vehicle values right now are at record highs, it won’t always be the case. In the event of a theft, an insurance company will give you the value of your car — not the value of your outstanding loan. Traditionally, there could be thousands of dollars of difference, and you’ll be out. They wait 30 days, and if your car isn’t recovered, or is recovered but can’t be fixed, they pay.

What if your car is jacked and it’s full of your sports gear or your laptop or cases of gold bullion? This is where your homeowner’s — not auto — insurance kicks in, so make sure you have it. Again, deductibles and bumped rates can make most of us suck up anything but a sizeable claim. If you know people who rent, make sure they have this insurance — it frequently gets overlooked. If you’re in the habit of keeping your golf clubs or expensive gear in your car all the time, consider what it would cost to replace it if your vehicle was stolen.

Arrests are being made, and the ubiquity of dashcams is providing help. Some people have reported being followed from a venue only to be confronted in their driveway. Some thieves are using devices like Apple Airtags to track a vehicle they later steal. Don’t fight someone who wants your car, but also be aware of your surroundings. If you think someone is following you, head to a police station instead. Run through the scenario with your kids who drive and keep them safe. Cars can be replaced.

Sign up to receive Driving.ca’s Blind-Spot Monitor newsletter on Wednesdays and Saturdays

Thanks for signing up!

A welcome email is on its way. If you don’t see it, please check your junk folder.

The next issue of Driving.ca’s Blind-Spot Monitor will soon be in your inbox.

We encountered an issue signing you up. Please try again