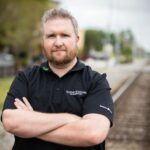 One recent television advertisement from Orlando-based Morgan & Morgan, which calls itself America’s largest injury law firm, for example, flashes large amounts of cash that may be available to homeowners whose dwellings are more than