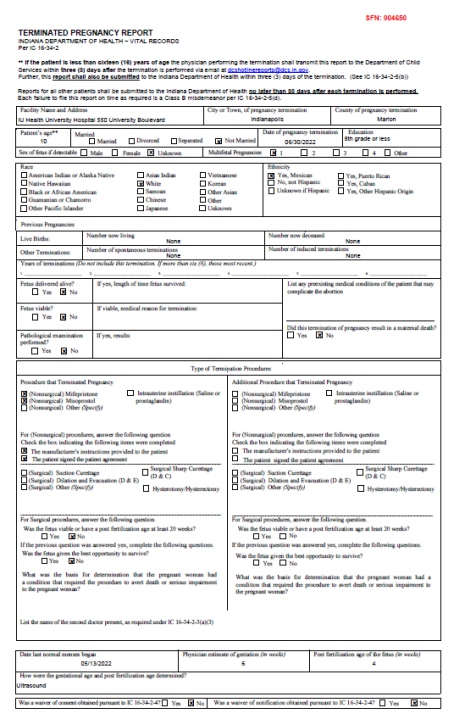 INDIANAPOLIS — After Indiana Attorney General Todd Rokita threatened to go after the license of an Indiana physician who provided an abortion to a 10-year-old rape victim from Ohio, documents obtained by FOX59 through a public record request proved the physician not only filed a terminated pregnancy report but filed the report within the required timeframe.

The terminated pregnancy report, obtained by FOX59’s Angela Ganote, shows that Caitlin Bernard, an Indiana obstetrician-gynecologist, reported the abortion on July 2, two days after the abortion was performed and within the three days required for terminations to be reported to the Department of Child Service and the Indiana Department of Health.

In the report, Bernard also indicated that the child suffered abuse.

Bernard publically shared the story of the 10-year-old rape victim’s abortion in an interview with the Indianapolis Star earlier this month. The 10-year-old girl had been impregnated when she was raped by a 27-year-old in Ohio and traveled to Indiana to get an abortion due to Ohio banning abortions after six weeks following the U.S. Supreme Court overturning Roe v. Wade.