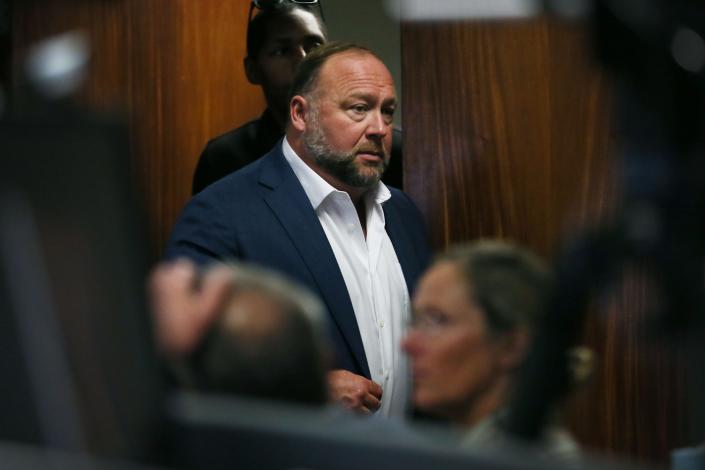 Jones is in the middle of a two-week trial in Austin to determine how much money he must pay the parents of 6-year-old Jesse Lewis, one of 20 children and six educators killed in the mass shooting at the Newtown, Conneticut, grade school.

Jones has been found to have defamed and caused intentional emotional distress to the parents, Scarlett Lewis and Neil Heslin, for labeling the school shooting a hoax and the parents as liars or government conspirators in a plot to crack down on gun rights.

Gun violence survivors: They thought Sandy Hook would ‘wake up’ the US. Uvalde school shooting proves it didn’t.

The parents have asked for $150 million, with the possibility of additional punitive damages that jurors will be asked to assess after testimony about the net worth of Jones and Free Speech Systems.

Andino Reynal, Jones’ lawyer, revealed the Chapter 11 bankruptcy filing after jurors had left for the day Friday, saying the bankruptcy lawyers “assured me there would be no interference with the progress of our trial.”

A hearing has been set for 8:30 a.m. Monday in a Houston federal bankruptcy court to consider Free Speech Systems’ emergency request to lift an automatic stay that would otherwise block the Austin trial.

The idea behind the bankruptcy is to have the dollar amount in damage awards from the Austin trial to present to the bankruptcy court, Reynal told state District Judge Maya Guerra Gamble.

Fact check: Comparison of school shootings in the US, other countries uses old data

Jones faces two other Sandy Hook trials to determine damage awards – one in Austin for the parents of 6-year-old Noah Pozner, and another for eight families in Connecticut. Both trials have been set for September, with jury selection set to begin Wednesday in the Connecticut case.

The bankruptcy case could delay both proceedings.

What’s everyone talking about?: Sign up for our trending newsletter to get the latest news of the day

The latest filing is unrelated to bankruptcy protection Jones sought in April for three other companies, including InfoW, which was formerly known as InfoWars. That filing came days before jury selection was to begin in the Heslin-Lewis lawsuit, forcing a postponement.

Lawyers for the parents later dropped InfoW from their lawsuit – the other two companies had not been sued – and the case was returned to Guerra Gamble for jury selection last Monday and the trial that began Tuesday.

The trial is set to resume at 9 a.m. Monday.

“Alex Jones’ latest bankruptcy stunt will not deter the Sandy Hook families from bringing him to justice,” Avi Moshenberg, a lawyer for the families who sued in Texas, said Saturday.